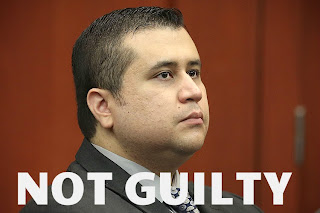 If you were paying attention, the Zimmerman trial afforded us a look at the best and worst of America.


Villains abounded, chief among them Governor Rick Scott, special prosecutor Angela Corey, race-baiter extraordinaire Al Sharpton, and the ravenous hordes of leftist media that demanded an innocent man be
railroaded into prison for the rest of his life.

In the hours and days after Zimmerman shot and killed Trayvon Martin, the local police and DA's office investigated the incident.  Realizing there was no evidence a crime had been committed, they declined to charge Zimmerman.  That's when our country showed her seamy underbelly.  Spearheaded by Obama, Sharpton, et al, many powerful players on the left began to exert enormous pressure on authorities in Florida.  Governor Scott didn't have the spine to stand up for what was right, he crumbled under the onslaught and appointed a special prosecutor, Angela Corey.

Corey went after Zimmerman with ferocity, and without regard for the evidence in the case.  Her prosecutors
put on a case filled with supposition, hypotheticals, and outright fabrication.  Zimmerman's defense countered with facts, forensics, and actual evidence.  But in the end, George Zimmerman still needed a hero.

The heroes in this case weren't powerful politicians, wealthy influential lobbyists, or government bureaucrats.  The heroes were the 6 ordinary, everyday American citizens on the jury.  Those 6 women did what no one else had the strength to do.  They stood up to the baying jackals of the main stream media, they ignored the howls of protest from the race-baiters in the black community.  It would have been so easy for them to fold, to just convict Zimmerman and get on with their lives.  But they chose the path of heroes.

Those six ordinary women in Florida have restored a little bit of my faith in this country.  The lesson for ALL of us to learn is this......What makes America a beacon of hope across the globe is not our rich and powerful politicians.  It's not our bloated nanny state government, or our feckless media conglomerates.  It's not the brain dead celebrities we fawn over.  What makes this country the greatest in human history are the people.  The ordinary people who perform acts of heroism everyday.  Most of these acts occur far away from the spotlights and TV cameras.  Once in a while however, we all get to see heroes in action.  Heroes like the 6 American women of the Zimmerman jury.