Looming Zimmerman Verdict a Crossroads For Us All 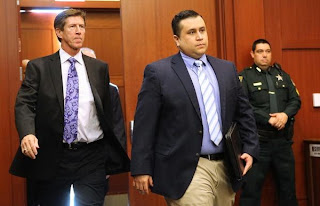 Well, I'm back.  After a self-imposed exile over the last couple months, I just had to fire up the SACSTW presses again as we all await a verdict in the George Zimmerman trial.  Obviously this trial has dominated the news in the last couple weeks, and I've heard a lot of griping about that from some folks.  "Why should I care about that, it doesn't have anything to do with me?" is the common lament of the poorly informed.

You should care about this trial and the verdict to come if any of these are true....


All of my life, I have been told that every man gets his day in court.  That when you find yourself embroiled in a dispute, victimized by a criminal, or perhaps even charged with a crime yourself, you will be treated fairly and impartially by the American justice system.  Anything less than a complete acquittal of George Zimmerman means that all we have learned about our system no longer applies.

A conviction of this man not only means he will spend decades in prison for a crime he did not commit, it means that all of us are mere pawns to be moved around the board by the main-stream media, race baiters such as Al Sharpton and Jesse Jackson, and liberal statists like Barack "if I had a son he would look like Trayvon" Obama.

Much is riding on the shoulders of the 6 jurors as they deliberate today.  Not just the fate of George Zimmerman, but the confidence and trust we all SHOULD be able to have in the American system of justice. There's nothing any of us can do now but wait.
Posted by the Crew at 2:40 PM