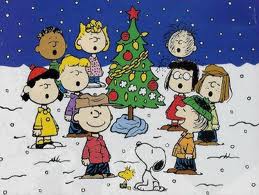 A Christmas Story, Miracle on 34th Street, blah blah blah.  For my money, the absolute best holiday program is A Charlie Brown Christmas.   First airing in 1965, ACBC has become an annual treat, and is must-see TV in the Crew household.  It airs tonight on ABC at 8pm EST.  I'm not sure why it appeals to me so much, I've always had a fondness for classic comics and Charlie and the gang are the standard-bearers.  The incredible piano score and that droopy little tree always get me!

You know who doesn't like A Charlie Brown Christmas?  Atheists.  Specifically, Arkansas atheists.  An elementary school in Little Rock is under fire from the "Arkansas Society of Free-Thinkers" for daring to transport their students to a live performance of ACBC at a local church.  The play is set for Dec. 14th during the school day.  Students who CHOOSE to attend the event (it is not mandatory), will be required to pay $2 each to cover the cost of school bus transportation.


"We're not saying anything bad about Charlie Brown.  The problem is that it's got religious content and it's being performed in a religious venue, and that doesn't just blur the line between church and state, it oversteps it entirely."

I checked out the website of these brain-dead crapweasels, and found the following statement amongst their "goals".

...to inform people of their First Amendment freedoms of and from religion, and to monitor and promote the awareness of local separation of church and state issues.

Atheists worship at a wall just like those at the Wailing Wall, they just do it in front of the mythical "Wall of Separation".  We've covered this numerous times at SACSTW, the separation of church and state is completely fictitious, and the First Amendment certainly offers no "freedom from religion" to the individual.  Heck I thought, maybe down in Arkansas there is such a theory, let's consult the Arkansas State Constitution....

We, the People of the State of Arkansas, grateful to Almighty God for the privilege of choosing our own form of government; for our civil and religious liberty; and desiring to perpetuate its blessings, and secure the same to ourselves and our posterity; do ordain and establish this Constitution.

"Almighty God", "blessings".......Yep sounds like a secular document to me.  Quite frankly, I am weary of this incessant bleating from the atheists that their rights are being violated by someone else's kid watching A Charlie Brown Christmas.  Of course the crap they spew piles higher and deeper this time of year, so I guess I should just thumb my nose at them and move along.  Would that they could do the same.
Posted by the Crew at 4:49 PM